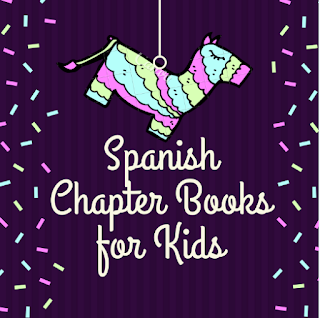 I recently got an email from a parent who was looking for some Spanish chapter books for her daughter who is in 4th grade and has to do three book reports this year on Spanish books. I often get requests like this from parents whose kids are in our wonderful dual-immersion Spanish schools at PUSD. As I was compiling my response, I thought it might be worth sharing for other people whose kids are in upper elementary school and able to read in Spanish.

We do have a lot of Spanish chapter books. Many of our most popular English series are available in Spanish translations. The ones that might work best for a fourth grader are the Clementine/Clementina books by Sarah Pennypacker or the Ramona books by Beverly Cleary, or some of Roald Dahl’s books (such as Fantastic Mr. Fox/El Superzorro). We also have Geronimo Stilton books in Spanish (originally Italian).

But I also want to recommend a few authentic Spanish-only chapter books a fourth grader might enjoy. These have been published in Spanish-speaking countries like Spain, Mexico, Chile, and Argentina.

¡Esta casa es mía! – by Ana Maria Machado. A family builds a house by the beach and has to learn how to share the environment with the animals that were already there.

The Candela series by Mónica Rodriguez – A funny, goofy superspy who goes around the world and even to different times and learns things about history

The Mondragó series by Ana Galán – Another very nicely illustrated chapter book series, this one is fantasy/adventure about a dragon who can’t fly

El secreto del escritor fabuloso by Jordi Sierra i Fabra – A magical and mysterious story about the nature of stories—a boy moves in next door to a writer and starts spying on him.

Jordi Sierra i Fabra has a lot of horror books similar to Goosebumps, so maybe when she’s a little bit older she might enjoy those too.