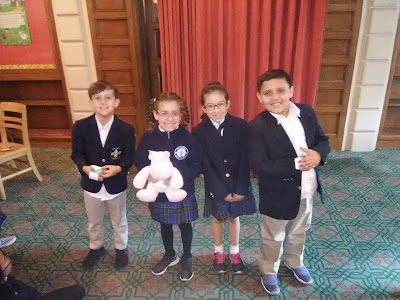 Today a class of 2nd graders came to my library for a visit, and I was filling in for the person who normally has this class. They are doing a unit on community helpers, so I did a jobs-and-the-economy-themed storytime for them. And since they're 2nd graders, I was able to involve them in many ways as volunteers reading things and acting things out. We sang, read two books, acted out a play, did a reading and guessing felt board game, and watched a video. Read on if you would like to see these ideas for your next Community Helpers storytime!

First we sang the Button Factory song. It's a great song to get kids singing, moving, and laughing! I usually skip the part about the wife and kids and get right to the point, with the boss asking Jo/Joe to press another button. They loved it.

Next we read the book Weasels by Elys Dolan. In it we see that it takes a lot of weasels working in different roles, doing problem-solving and thinking up plots, in order for the weasel species to successfully take over the world! 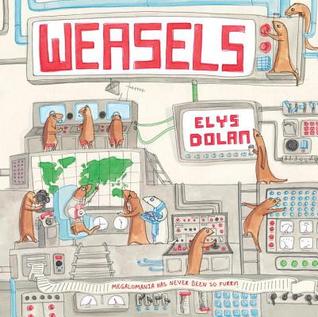 Then we did an activity where I took out some felt envelopes and told the class, "I was supposed to help my mail carrier friend deliver her letters today, but they got all jumbled up in the bag and the labels came off. Can you guys help me figure out whom each one is for?" Five volunteers lined up and each one read the short letter that was inside the envelope--things like: "Thank you for healing my ear infection and giving me medicine"--and decided whether it was for a Doctor, a Teacher, a Janitor, a Bus Driver or a Plumber. 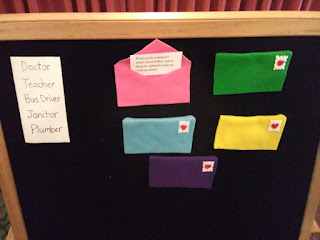 We read a West African/Caribbean folktale called Don't Leave an Elephant to Go and Chase a Bird by James Berry and illustrated by Ann Grifalconi. In it Anancy makes a series of trades, starting out with a corn cob and ending up with an elephant, but he lets the elephant escape when he gets distracted by a bird he wants to bring home for his son. I like this story for the theme of jobs because it helps the kids understand and explore what it meant to do a job in the ancient days before money was the typical payment. 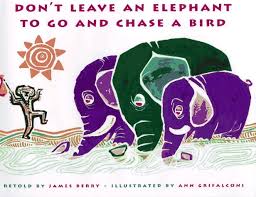 Then we acted out a play! It's one of the activities in my book 36 Workshops to Get Kids Writing, from the chapter on folktales. 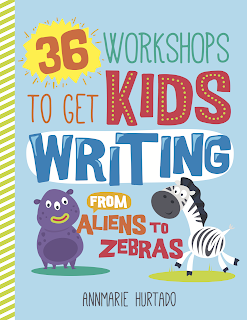 Now, if I had more time, I would have involved the kids in actually writing the script of this play, but since our time was limited I wrote out the scripts in advance. There were five actors, including myself. Each person had an object that they didn't need and wanted or needed something else. I played the role of an alien who had crash-landed here and needed to fix my spaceship. The kids played other roles. 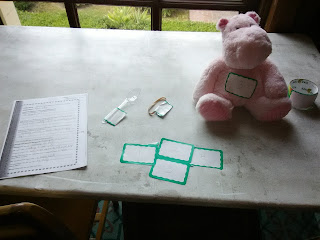 The props I used were simple: a spoon, a bag, a rubber band, a stuffed toy and a roll of duct tape. I numbered each one and then gave the kids number stickers to wear. I told everyone that I needed to fix my spaceship and only had a spoon. I asked the first kid to act like he was slobbering out of a bag. I asked him why he was slobbering like that, and he said, "I wish I had something to eat with." Then I gave him the spoon, and he gave me the rubber band he was holding.

I next came to a girl with long hair who was trying to dance but her hair kept getting in her face. I offered her the rubber band and she offered me a toy.

I next came to a boy whose child (played by a girl from the class) was crying. I gave the boy the toy and he gave me the roll of duct tape. Then I announced, "Hooray! This is just what I need to fix my spaceship! I guess it's my lucky day."

They did a great job with it and had fun hamming up their roles! 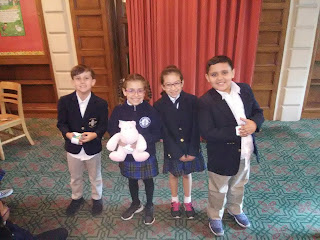 You'll find this activity and the handouts you can give kids to write their scripts in my book in "Lesson 10: Small Actors Folktale Theater."

Last, I showed an old movie from Reading Rainbow, and it was a big hit with the kids. We watched Fox On the Job by James Marshall. The story is funny and it shows kids that getting a job is no joke--you're expected to do what is needed and not get lazy or careless. Fox doesn't seem to be a very good fit for many of the jobs he has to do, but in the end he finds something suited to his talent for laying around. 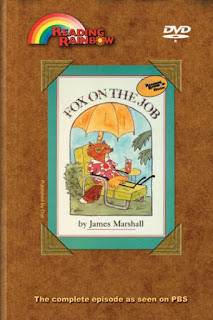 Community Helpers storytimes are always in such high demand when you have classes coming to visit you or taking field trips to the library. So I hope these ideas will serve you well!
at May 02, 2018 No comments:

Congratulations to the winners of the 36 Workshops giveaway! 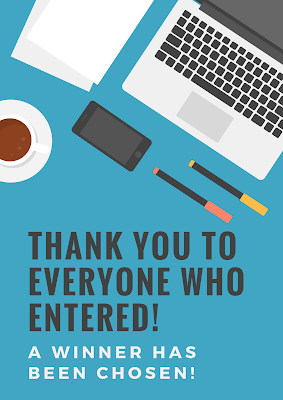 Over 50 people entered my Rafflecopter giveaway for a free copy of 36 Workshops to Get Kids Writing! I loved reading everyone's entries and answers and seriously wish I could give all of you a free copy. You are great parents, teachers and librarians who clearly care about doing creative writing with your kids. So I'm working with ALA Editions to get you a discount off the retail price of the book and will be in touch as soon as I have it.

And, as it turns out, I decided I could afford to choose two winners, sort of a "first place" and "second place" which were just randomly chosen by the Rafflecopter site. Their names are: 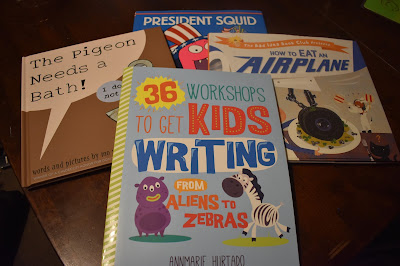 Marissa is a school librarian who started doing creative writing around 7th grade, but hopes to expose her students to it much younger! She will be sent my book and three of the picture books used in my workshops: 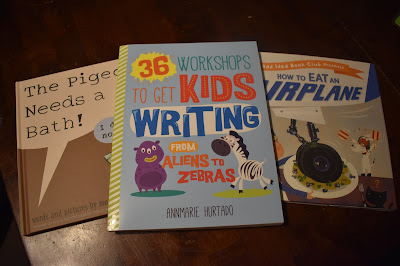 Selene is an elementary school teacher, and I can't wait to see what she'll do with this in her classroom. She will be sent my book and two picture books:

Once again, a big thank you to everyone who entered to win, and although I could only pick two, I wish I could send you all something. I will be getting in touch with everyone else who entered to email you a $5 off coupon as soon as ALA Editions has them available!