This could have fascinating implications for makers of tablet storybook apps, most if which tend to be a little too heavily animated to be encouraging of a child's imagination. At the very least, it should be good news to everyone who promotes illustrated books for kids, because the pictures give a child "limited visual scaffolding assisting the child while still encouraging active imagery and reflection." Basically, the pictures should give a child something to focus on while developing their listening skills, but don't have too much going on to take away from hearing the story.
at June 13, 2018 No comments:

A couple weeks ago (right before I left for my vacation) we had a fun Kids' Writing Workshop all about rewriting fairytales. I always try to keep my workshops rooted firmly in books in the library's collection, so for this workshop I had fun gathering up all of the Jack and the Beanstalk retellings I could find, and putting them on display! There were several Old West retellings, including one where the Jack character is a cowgirl and one where the Jack character is a really badass Native American gunslinging bandit, two science fiction ones taking place on other planets or in outer space, a few told from the point of view of the giant, a few longer novel-length works where Jack's character and motivations are much more developed and in which Jack interacts with other fairytale characters from other stories, and more, more, more!! 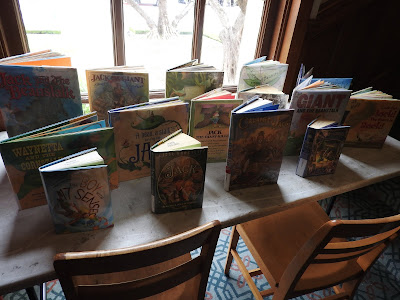 The kids and I talked about what makes a good rewritten fairytale--that it helps to have some sort of "twist" on the story, either by changing a character's gender, age, cultural background, setting, or even the genre of the fairytale (like those Western and sci-fi versions of Jack). 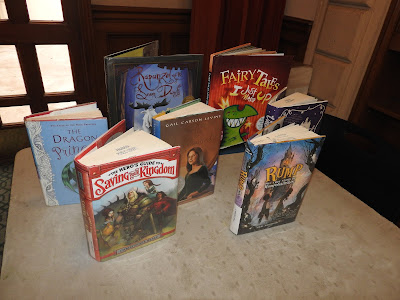 Then I had the kids draw slips from three envelopes. One envelope had slips of paper with fairytale characters' names. Another had papers with problems or plot elements. And the third had suggestions for how to make the fairytale different with a "twist." Kids drew two character slips, two problem slips and two twist slips, so that nobody was "forced" to write about any specific character or concept but had options to choose from and could go where the inspiration took them! I took pictures of each child's slips:


It was really fun to see what the kids brainstormed for their rewritten fairytales, and also how they managed to tell their stories with interesting first-person points of view! I know I'll be doing this workshop again and am sure I will once again find lots of inspirations in the books here at the library.